We are delighted to announce that the Áras won The Grand Supreme Prize at the Irish Accommodation Awards in the Nursing Homes Category. Other winners included Ashford Castle and The Kilarney Park Hotel.

The Áras was also presented with a GOLD AWARD for excellence in hygiene and cleanliness for the fifth year in a row. This was achieved in recognition of the exceptional standards maintained in the Áras across a wide range of accommodation services.

These awards add to a growing list of achievements received by the Áras care team (see below). 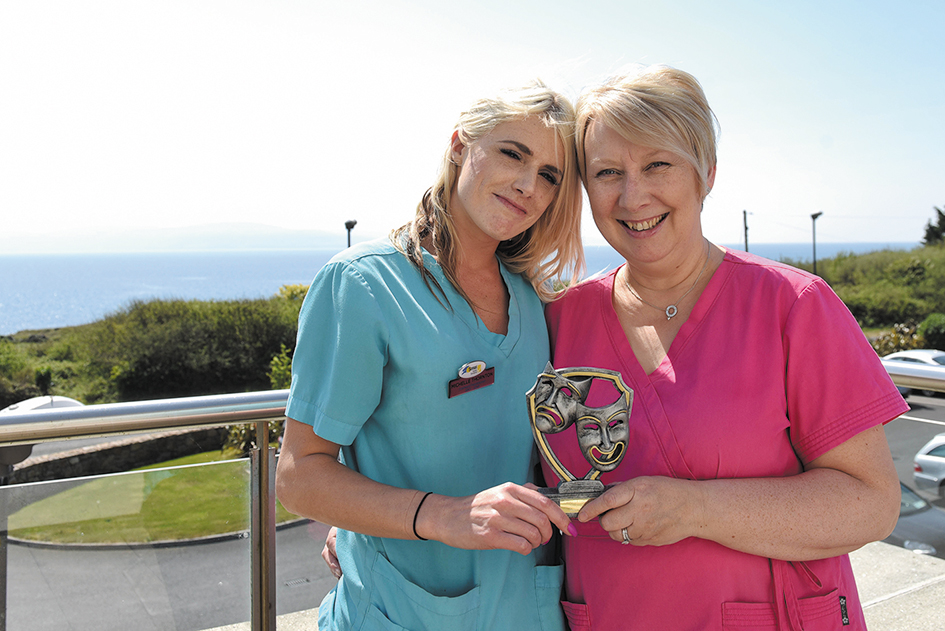 Well done to Katie and Laszlo Nagy who got to the finals of the Nursing Home Ireland Care Awards.

The Áras has achieved the coveted Quality Mark for Nursing Homes from EIQA, the Irish guardians of the Q-Mark.

The Áras won the title of Best Private Nursing Home at the Community and Council Awards, after being nominated by Galway County Council.

Áras acitivities coordinator Katie was a finalist in the NHI Care Awards for the many activities and events she runs involving the local community.

St Patrick’s Day is an important celebration at the Áras. Residents and staff also take part in the local parade. ​We were delighted to win the cup for Funniest Float at last year’s parade!!!

The Fáinne for Irish language

Dinny McGinley, TD, came to the Áras to award members of the care team the Fáinne, when he was Minister for the Gaeltacht, in recognition of the home’s commitment to caring for local people through their native language.

Áras in line for national award

‘As a team we give our best every day’

‘I wanted to see how Irish was used on a daily basis;